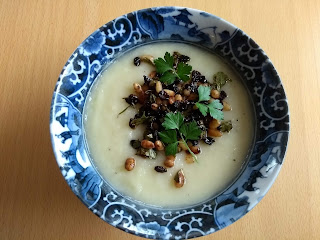 It is now spring, so theoretically I should start cooking with fresh peas, artichokes, and asparagus. But before moving on to those, let me share a recipe that I have made a lot this past winter.

Parsnips are a fixture of British Christmas dinners, but in Holland they were almost unknown and referred to as a forgotten vegetable until a couple of years ago.  Prior to the introduction of the potato, they were a staple of the diet here. In fact, they were likely to be the vegetable used instead of the potato in the original hutspot, which legend says was left behind by Spanish soldiers when the dikes were broken and land flooded during the Siege of Leiden in 1574. Hutspot made with potatoes and carrots is still eaten in Leiden on 3 October to celebrate that Dutch victory.

And indeed parsnips seem to have been thoroughly forgotten. I never had it as a child, probably because my Dutch parents were unfamiliar with it, although perhaps it was also forgotten in Canada and not available then.

But it is once again to be found in Dutch supermarkets and not just at the Turkish greengrocers! So there is no excuse for not making this wonderful, unusual, and easy soup.

Adapted from: Six Seasons: A New Way with Vegetables, by Joshua McFadden
Serves 2 for meal or 4 for a first course
The zingy fresh relish really makes this dish. Don't omit it!

While the soup is cooking, make the relish.
Serve each portion of soup with a big spoonful of relish. If you have extra relish, serve it on the side for those who want more. 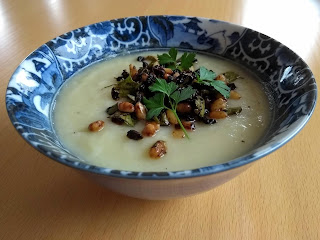 Barbara
Amsterdam, Netherlands
I write computer documentation for a living, cook and read in my spare time, occasionally make music, and pet my cats daily. My blog is where I share some of my favourite recipes, experiments, and food-related musings.